SA’s youngest children are not read to enough 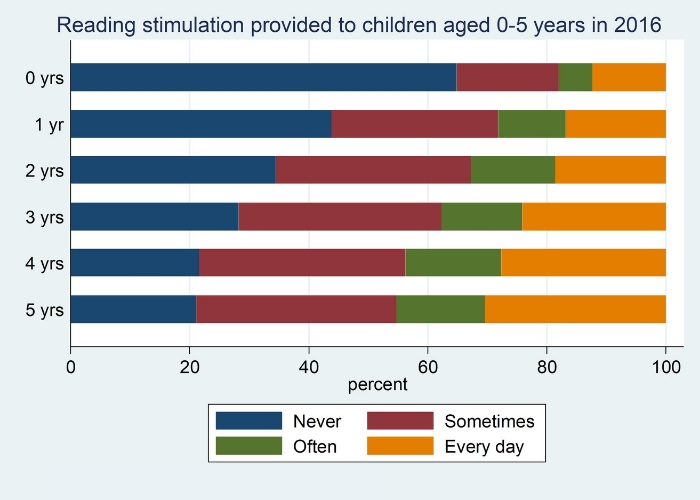 Reading is an important form of stimulation and teaches babies and children about communication; introduces them to numbers, letters, colours and shapes; develops their listening, memory and vocabulary skills; and enables them to understand the world around them.

Despite evidence supporting that babies should be read to from day one, data collected during the General Household Survey 2016 shows that half of children under 2 are never read to. The good news is that the regularity of being read to does increase as children get older – but not by enough. A third of South African children under 5 don’t get read to at all.

In the first six years of life, a baby’s brain is developing at a very fast pace – the fastest than at any other time throughout their lifespan. In the first few years, over 1-mn new neural connections are formed every second and by the time a child turns two, their brain will have twice the number of neural connections it will in adulthood. Early life experiences will impact a child’s future and lay the foundations for – among other things – any future learning. Therefore, when parents and caregivers read to their children, they strengthen these existing neural connections and ensure a strong foundation for future learning and literacy.

A study by the American Academy of Paediatrics reports that reading books with children from early infancy – even when they are not yet able to understand what parents or caregivers are saying or reading – improves their vocabulary and reading skills four years later – before they start preschool.

Another study (Two Different Communication Genres and Implications for Vocabulary Development and Learning to Read) supports the early introduction of reading to children, explaining that reading to young children is even more effective in helping build children’s vocabulary than talking to them. The researchers believe that reading aloud to children helps them develop word mastery and grammatical understanding, which forms the foundation for learning how to read.

Studies by one of South Africa’s leading universities, Stellenbosch University, investigated the impact and benefit of supportive dialogic book-sharing – an interactive way of shared reading between parent or caregiver and their child – to families in poor communities in sub-Saharan Africa and has found that infants between 14-16 months showed substantial gains in language, attention, and social understanding.

One study (The impact of dialogic book-sharing training on infant language and attention: a randomized controlled trial in a deprived South African community) found that shared book reading with infants over an eight week period increased the number of words they understood and enabled them to vocalise more words compared to infants in the control group who did not partake in this activity. The infants who read with caregivers also showed more gains in terms of sustained attention.

Another study (Randomized controlled trial of a book-sharing intervention in a deprived South African community: effects on carer-infant interactions, and their relation to infant cognitive and socioemotional outcome) look at the cognitive and socioemotional outcomes for infants between 14 and 16 months of age and found that infants who were involved in book sharing with caregivers showed a considerably higher rate of prosocial behaviour and were inclined to more frequently mimic the interpersonal interaction with caregivers.