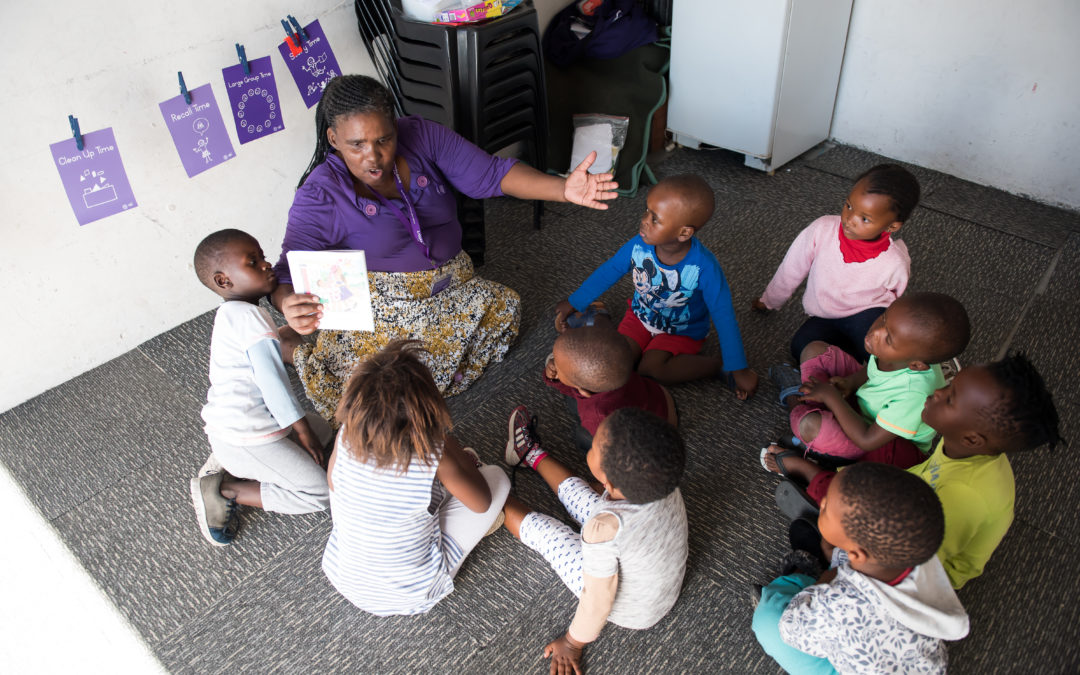 In just over three years, SmartStart has trained over 3 500 people to fill the gap in early learning service provision by running playgroups – to the benefit of over 33 349 children across South Africa.

We spoke to Justine Jowell (Lead – Programme Design and Development) from SmartStart about how the organisation’s model works and the exciting journey it has been through over the last few years, as well as what we can expect to see from SmartStart in the future.

Q: Where did the idea of a social franchise for early learning come from?

In South Africa, only 40% of children between three and four years of age have access to the important early learning opportunities that can build the foundation they need to be school-ready. Recognising that as a country the commitment to Early Childhood Development (ECD) delivery was there, but not the mechanism for how this could be implemented sparked the creation of SmartStart. The establishment of a nationwide social franchise to enable the delivery of affordable, quality (and standardised) early learning opportunities for children currently not accessing these important learning programmes.

Q: What have been some of the biggest success stories globally of social franchising used for the delivery of development services?

Social franchising is being used the world over as a game changing strategy for getting essential services to people at scale. These social franchises operate across a range of sectors, including healthcare, education, and social support and protection. Examples of successful social franchises (SF) exist globally, with many of these in the health sector. In 2012, there were at least 74 clinical SF programmes operating in over 40 countries with more than 75 000 providers ranging from hospitals and clinics, to independent doctors, nurses, pharmacies, midwives, and community health workers. The franchised services include maternal and child health, reproductive health and family planning, HIV, TB, and STIs. Almost 15mn visits to SF outlets were recorded in 2012.

There are growing numbers of successful and impactful social franchises in the education sector. In Ghana, the Omega Schools are a for-profit SF aimed at expanding access to high quality, low-cost private education for low-income households. In Kenya, Bridge Academies (BA) is also a for-profit SF providing low-cost quality nursery to grade 8 education to children in Nairobi, Mombasa and other peri-urban areas. BA started in 2009 and has been both successful in rapid growth and enrolment but also in achieving in student learning (measured by national tests) – 30% above public schools.

Q: What was specific to South Africa that indicated a social franchising solution to the early learning challenge may be appropriate?

The lack of a coordinated mechanism for the delivery of cost-effective, quality early learning programmes coupled with a government policy commitment to the provision of early learning (as expressed in the National Development Plan and the National Integrated ECD Policy) meant there is both a need and a commitment, but mechanism to deliver this at scale. Additionally, the presence of strong local Non-Governmental Organisations placed around the country, but without a standardised approach to delivery made the context ripe. ECD in South Africa is explicitly a publicly supported but privately delivered service, and this additionally lends itself well to the social franchise type delivery model. 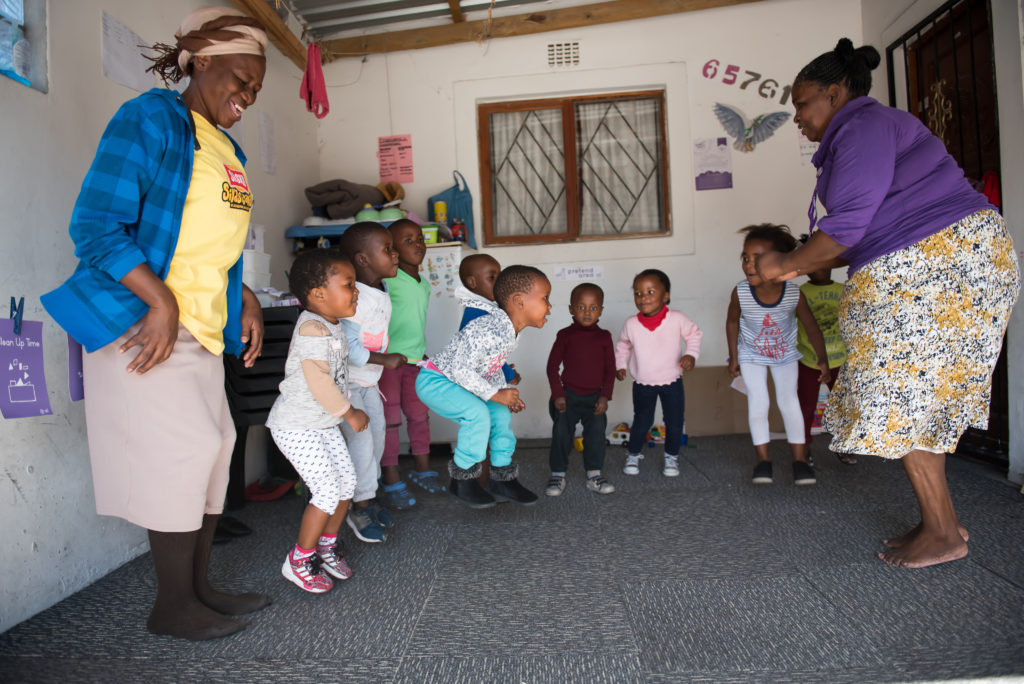 Q: SmartStart relies heavily on public partnerships for implementation. Please explain how these work and why they are crucial to your model?

Currently, our main public partnership is with DCOG (Department of Cooperative Governance) and it involves work with the Community Works Programme (CWP) and Expanded Public Works Programme (EPWP). These programmes provide work opportunities for participants in identified underprivileged wards. SmartStart partners with local implementors to match up interested matching participants with a stipend, and with the opportunity (after training) to engage in more meaningful, potentially career/small business -building work establishing an early learning programme for kids.

Q: What were your biggest challenges in the earliest days of implementation?

The biggest challenges in the early days were at franchisor level, building understanding of the model and learning regarding effective implementation partnerships with our local franchise implementing partners. At the franchisee level (early learning facilitator – also known as SmartStarter) it was about recruiting the right people into this opportunity. This led to the development and improvement of more rigorous recruitment process that included assessment. Additional challenges have been around the financial viability for Smartstarters who are not receiving a stipend. For many it is difficult to sustain their programmes, so development both of more business skills training to support them, as well strengthening the growth path and related incentives available to them has been important. Future work around ensuring that these essential non-centre based delivery models can access government support and subsidies is essential.

Q: Has your model changed in any significant way since you first started implementation in 2014/2015? Why?

Probably the largest change has been that in initial design SmartStart was envisioned mainly as a playgroup model (sessional programmes a few times a week). This has shifted quite significantly, and we have a much larger cohort and focus on child minders (full week programmes of small groups based in homes).

Q: What is the projected scale up of SmartStart over the next 10 years? Is the operating environment conducive to scale up currently? What are your biggest concerns and needs?

The projected scale up is that by 2025 we aim to have over 30 000 SmartStarters operating nationwide, delivering programmes to a million children annually. We currently (October 2018) have over 3500 SmartStarters delivering to over 34 000 children and will be ramping up our delivery in the next four years, starting with a doubling of SmartStarters and more than tripling of child numbers in the coming year (July 2018 – June 2019). 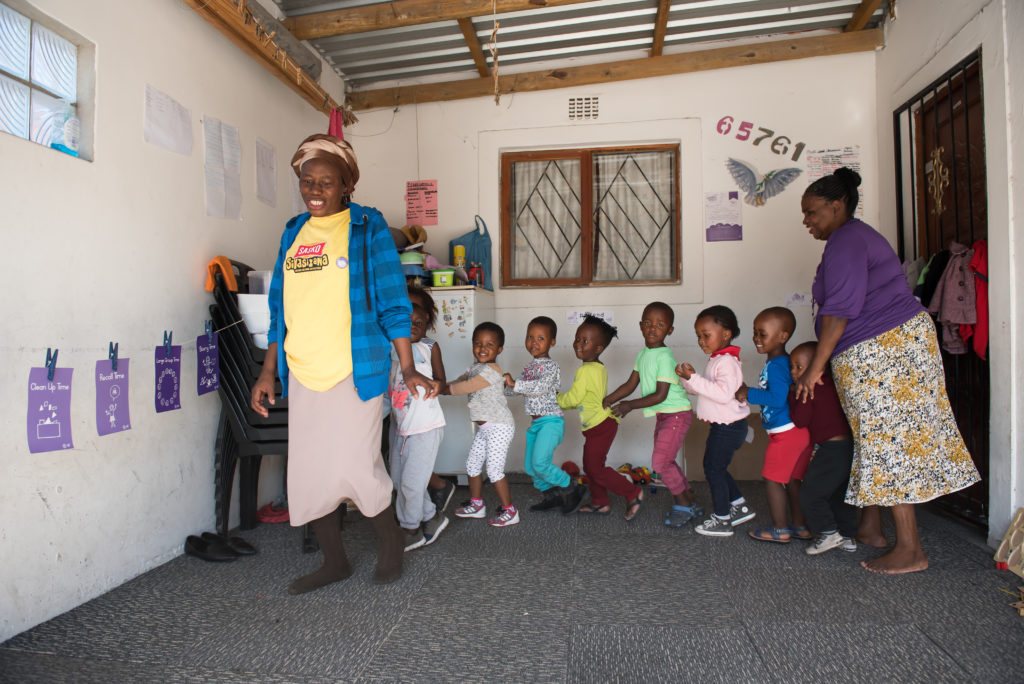 Q: What are some of the other successes SmartStart has achieved since its establishment three years ago?

In our first three years of implementation (May 2015 – June 2018) we successfully developed and established our model and brand, reaching thousands of three and four-year-olds across South Africa. We tested our programme on the ground, built strong partnerships and refined the systems that support delivery at each level of the franchise. We also put in place a skilled and dedicated team to lead and manage the organisation.

We believe that SmartStart has a unique and important contribution to make to early childhood development in South Africa both through our standardised approach, but also critically because we are network of strong locally based NGOs delivering the programme. Our social franchise model is enabling us to activate a new generation of independent early learning facilitators, bringing early learning opportunities to communities that previously had none, while upskilling unemployed women and men and creating thousands of micro-enterprises.